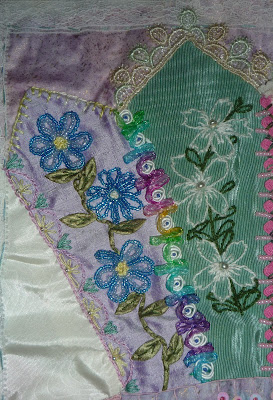 The Bountiful Beginnings Novice round robin has been plagued by difficulties and I have ended up acting as round robin angel on behalf of two people in this one.  This block belongs to Marilynne, who had to drop out of the round robin, so I only have to stitch once on this one.  I chose to stitch up two of the fan blades.  I did outline embroidery of some flowers on the green blade and beaded flowers with ribbon leaves and stem on the blade to the left of it.  On the seam between the two fan blades I used some great trim I bought from Colleen at the CQI retreat.  Isn't it pretty?  For the seam on the left side of the beaded flowers, I did semi-circles in chain stitch, clusters of three detached chain stitches between each semi-circle and within the semicircles used straight stitches and a bead.  The top of the beaded flower patch is done in buttonhole stitch in a variaged DMC cotton perle, the same thread used for the french knots in the center of the beaded flowers,  and the top of the green patch is finished with a pretty trim I found in a sari shop. 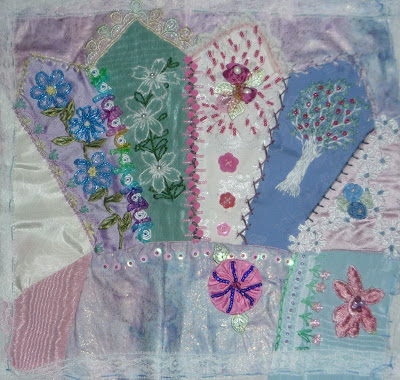 This is Marilynne's block as it looks after I added my stitching.  Now it will go in the mail to Lisa who is the last to stitch before it goes home to Marilynne.