December 12, 2008
Several people had admired the beaded feather stitch that I enjoy using on seam treatments so I have decided to write up a little "how-to" on it. And since one picture is worth a thousand words I went a little crazy with the pictures!

So, you will need a beading needle for this stitch , some seed beads and thread. I like using Fireline now for the security of it but since it shows up better in the pictures I have just used regular DMC (one strand). I have used the floss on this seam many times in the past with no problems. 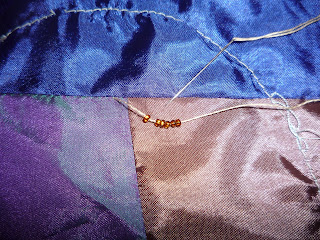 After securing your thread well on the back come up to the left of your seam and then thread six beads onto your thread. You can use more beads but the key is to make sure they are an even number (6, 8, etc). To complete the first stitch you put your needle down to the right of where you came up and then come back up at the halfway mark a bit lower. Pull your thread through and then hold it between the two center beads. This is why you need an even number. With three beads on one side and three on the other it keeps the "V's" nice and uniform. 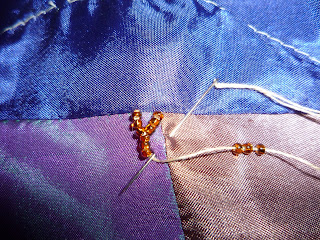 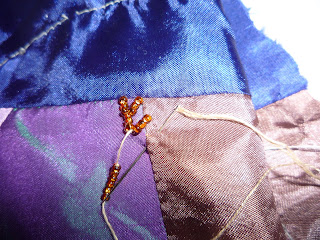 Carry on the same way for the next stitch. 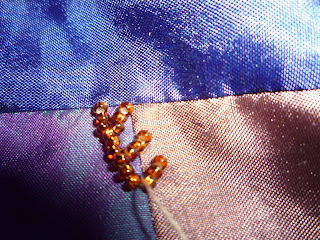 You now have three stitches stepping down and to the right - time to start working back to the left.

The next stitch is made in exactly the same way except you are moving downwards and to the left this time. 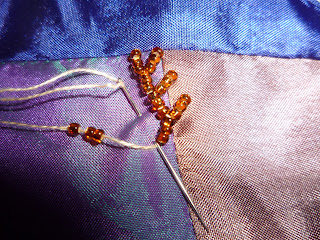 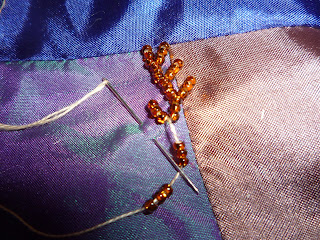 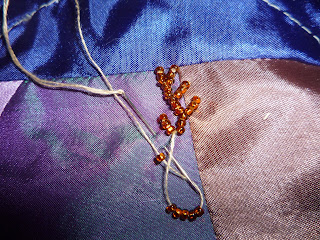 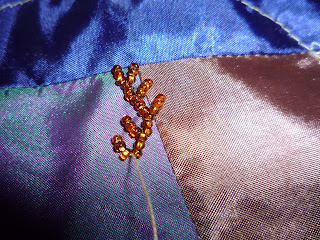 After making two stitches downward and to the left you have completed this leg. Time to head back to the right again.
Keep working back and forth in this way until you have a seam of the length you want.

You will find it helpful to use your thumb to hold the thread between the beads as you make each next step to keep it laying in the center where you want it. 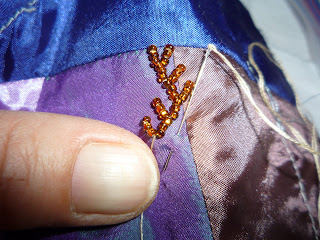 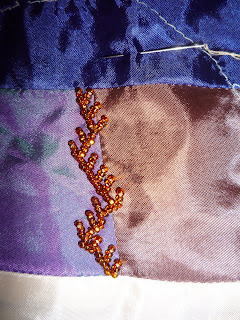 Your seam is done - now just make sure you secure the thread well on the back of your work. Don't want the beads escaping! lol

There are a lot of the basic embroidery stitches we use that can easily be adapted to bead embroidery - this is just one. Have fun!

Diane said…
I've often wondered how this stitch was worked. Thanks for the instructions. I'll try it soon.
Diane
December 15, 2008 at 8:04 PM

Anonymous said…
WOW, Susan, you always make everything look so easy! Thank you for the wonderful tutorial. Now I'm no longer afraid to try this.
Wanda
January 1, 2009 at 9:21 PM