May 08, 2020
Once you have a successful and established raspberry bed, it tends to double in size every year so it isn't hard to find someone with raspberries who is willing to share some canes with you.  You really don't want to be buying them if you don't need to.  A quick google search revealed prices between $4 and $24 per plant in my area and even at $4 each, my 50 canes would have cost $200. 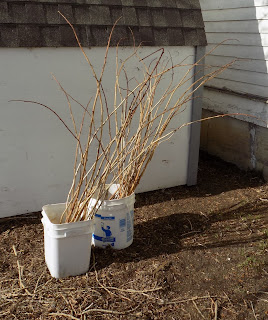 What do these two buckets look like to you? You likely see about 50 raspberry canes... I see a ton of work ahead in getting them planted.  My local garden guru, Ken, generously agreed to dig up some canes for me from his abundant patch of raspberries.  So, home they came the other evening gently nestled in these pails of enough water to keep the roots covered.  The buckets were placed in the shade until the next day when I got to work on planting them.  You want to get your canes planted within a day or two - no dilly-dallying!
Just a word that there is a best time to dig up your canes to share.  You want the frost to be out of the ground or you are likely to damage the roots.  You want to catch the canes before the shoots start coming out too because they will be very easily broken off during the process.
I had an area in mind along the back fence of my garden for planting.  Raspberries like to be planted in a single row about a foot apart.  I had to break sod to plant mine but hopefully you will have an area already dug up and ready before you bring your canes home. 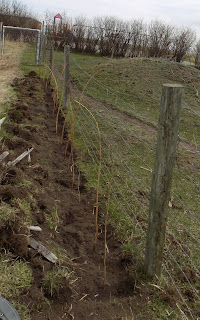 This is where I was at the end of the first day.  I dug up the grass and removed as much of the weed roots as I could and then buried the roots of the canes with soil.  I tamped the soil down a bit with my foot.  Next came a layer of well rotted horse manure which I have on hand since my daughter's horse has lived with us for 15 years now. Horse manure is not my favourite for the garden since it tends to have a lot of weed seeds but it is what I had.  After the manure, a layer of compost was added.  Tamped it all down again.
This is only half the canes planted.  The old body gave out halfway through the job so I had to go out again on the next day to finish.  Not ideal, but it is what it is.  It was a cool, cloudy day so hopefully the plants didn't get too stressed.
Once you have your raspberries planted you will need to have some patience.  They will likely sulk for a year, two or even three before you get much fruit from them.  Be patient - remember the old saying:  "The best time to plant a tree is 20 years ago, the second best time is now."  Same deal with the raspberries!
More on raspberries later - mulching, pruning and all that other good stuff.