Notes from the Lake 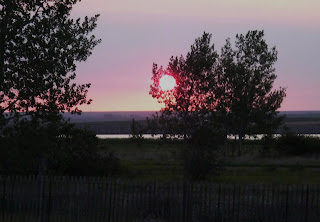 The August long weekend is over and it was a mixed bag. The campground was very busy and that was good. The family came out to visit and give me a hand and that was the best part. It is always great to see the kids and the grandkids and to get to spend some time with them! The down side was the two nasty storms we had go through during the three days. Friday night we had a thunderstorm preceded by a wild wind storm. There were at least fifteen tents absolutely flattened! A lot of campers gave up on the weekend and went home then - likely a decision they are happy about now since we had an even nastier storm come through on Sunday night. Everyone was woken up at 3:15 a.m. by lots of thunder and sheet lightening. Then the hail hit. They were golf ball size or bigger and none of the trailers escaped damage. It was really scary in the middle of the night to wake up and find all the roof vents were smashed and we were all cold and wet with hail and water pouring in. The noise was incredible - it sounded like a freight train or like there was a dump truck pouring a load of gravel on the roof! Outside the windows was just a wall of grey - you couldn't see anything. I think we must have been very close to the edge of a tornado. Just down a bit from our campsite it looks like something touched down. There is a path where the grass is flattened and debris was swept along. The part I found most troubling were the birds. I have been enjoying my beloved swallows all summer - both those I have watched in the nest as well as the huge flocks that come out morning and night to do their astounding aerial acrobatics as they eat mosquitos. While surveying the damage of the storm near the path I mentioned we found two large trees where the swallows had been roosting. Under them and along the path were large numbers of dead and bloodied swallows. These poor birds - it just made me so sad to see them all. There were several ground squirrels among the victims of the storm too. It appears they were forced from their burrows to avoid drowning only to be beaten to death by the hail.

The family all went home on Monday afternoon but one of the campers who had gone back to the city phoned my house to let them know that there was another severe thunderstorm and hail warning for last night. I was surprised last evening to find my darling daughter, Katie, on the doorstep of my trailer with dry blankets and pillows, announcing she was here for a sleepover! She had to get up at 4 am to leave for work but didn't want me to be alone out here with another bad storm. I was very happy she was here - everytime the thunder and lightening and rain woke me last night my first thought was that I was not alone because she was here. I know I am loved but sometimes it is such a good warm feeling to feel it surround you like that! Today the I will be working on the big cleanup to get things back to normal before next weekend when there is a big fishing tournament at the lake.

pam said…
Oh Poor Kerry!!
I am just catching up..This was awful! Glad you are ok.
Thought we had a dreadful wet summer in Uk ( log fire on several times)But this is something else!
Those poor birds...I watch them bye our home circleing around beautiful graceful birds. They are mixed up too and seem to be getting ready to migrate...thats very early for them...weathers got them mixed up!
Hugs Pam
August 8, 2009 at 2:05 PM

Skye said…
My heart just hurt when I read your blog today...I'm so very sorry for your swallows and squirels..Mother Nature sure was not kind that night was she? I am,however, very glad that your daughter showed up but happier you both are safe..Take care!! hugs, Skye
August 8, 2009 at 5:07 PM