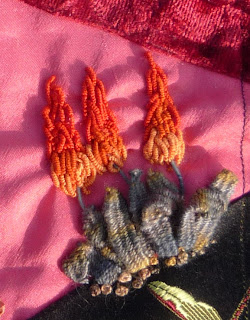 I have found myself really challenged with this block! It is nearing completion in the round robin rotation and all the work already on it was so lovely - mostly really lovely silk ribbon florals done in gorgeous hand dyed ribbon. I could not manage any silk ribbon good enough not to stick out like a sore thumb so have decided instead to stay with the floral theme but to use another technique.

So this is the first part of what I have done. Here I am again embroidering a plant I have never seen - or at least never seen in bloom except in pictures. It is an aloe vera.

Someone on the CQI list had mentioned it would be helpful to them, and others new to cq, if it were explained what stitches are used, what threads, etc., so I am going to try to make it a practice to go into excrutiating detail from now on in hopes it is helpful. If you aren't interested in all the details, just look at the pretty picture! lol

The inspiration for this motif came from the book, Ribbon Embroidery and Stumpwork, by Di van Niekerk. The first step was to make the three stems. I used beading wire for this and secured each piece in turn by pushing it through to the back of the block. I bent it back on itself and secured with several stab stitches, then bent it back on itself again and added more stab stitches. To cover the wires I used two strands of Weeks Dye Works cotton floss, brought it up through the fabric at the bottom of my wire and just wrapped it around and around until I had the length I wanted the stem. I secured the end of the wire the same way as I did at the beginning except left it on the front because the bullions would cover it. If I did this again I would take it to the back because the end of the wire keeps wanting to peek through the bullions. I made the wire a little longer than it needed to be for the distance so it would have some dimension.
Next step was the blossoms. I used three colours of Gloriana Princess Perle Petitle silk thread in progression, starting at the bottom making bullion knots of random length, covering the end of the wire of the stem and then working up to a point, each layer of bullions overlapping the last.
More fun then with the leaves! They were mostly open picot stitch with a couple at the front being closed picot stitch so some of the front leaves would have a nice point at the bottom. For these I used House of Embroidery Perle Thread No. 8. It is a 100% cotton thread, hand-dyed in South Africa, that I received as a gift. Such a wonderful thread to work with! Most of the leaves were left free at the top but a few I secured to the fabric with a tiny stitch or two to shape them as I wanted. I wanted to have a few bending over.
The last step were a few french knots and little straight stitches for a suggestion of the earth under the plant, again using the same thread as the leaves in another colour. Hope this explanation helps someone!

Anonymous said…
I LOVE it. it is so pretty. You did a great job explaining to and since I am dabbling in Stumpwork, it is very nice to have some on my Spider block. Thank you so very much Kerry!!!
August 31, 2009 at 9:18 PM

CJ STITCHING AND BLOOMS said…
Hello kerry, Your stumpwork is lovely and your tutorial is fantastic. Can you believe our summer is just about over. I hope you had a wonderful summer at the park. Hugs Judy
September 1, 2009 at 6:10 AM

Shawkl said…
Just stunning! I love the lifelike appearance with all the layering of bud and leaves. Great job! Kathy
September 4, 2009 at 6:07 PM

pam said…
Hi Kerry :O)
I too loved your work here, such viberant colours beautiful!!!!!!!
I too wonder about those Picots as leslie said.
I love all those neat orange Bullions too. I am going to try and find that book on Amazon for myself!
Hugs Pam
September 10, 2009 at 2:33 PM

Unknown said…
This is so beautiful and creative! I'm going to try this. I use bullion stitch a lot. It's one of my favorites and always adds such a richness to a piece. Thanks for the inspiration!
Dakotah
September 10, 2009 at 5:02 PM

Susan said…
Kerry,
I love what you did and the look of the dimensional work! Thank you so much for your excellent and detailed (even if it was excruciating for you) explanations and tutorial for this flower grouping. The types of threads used are helpful to someone like myself who is just beginning as well. I appreciate you and your taking the time . I am sure many will benefit from this!
Thanks for sharing your talents!
September 13, 2009 at 8:26 PM