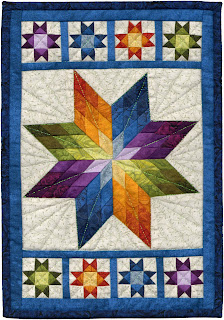 The Alzheimer’s Art Quilt Initiative (AAQI) is starting a newsletter! Sign up before noon (Eastern) on November 13, 2012 and you’ll be in a drawing to win “Bright Star” featured here.
“Bright Star” was made by AAQI supporter Martha Wolfersberger of Frenchtown, MT. The quilt measures 8.25″ x 12″ and it is meticulously machine pieced and quilted.
Sign up here: http://www.alzquilts.org/newsletter.html
The Alzheimer’s Art Quilt Initiative® (www.AlzQuilts.org) is a national, grassroots charity whose mission is to raise awareness and fund research. The AAQI auctions and sells donated quilts, and sponsors a nationally touring exhibit of quilts about Alzheimer’s. The AAQI has raised more than $773,000 since January 2006.
Thank you for making the AAQI possible!