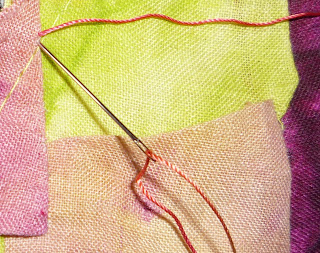 I used a new stitch this week and thought I would share so here is a little tutorial on how to do the braid stitch. Begin by making a small straight stitch as shown above.
Bring your needle up again a small bit below. 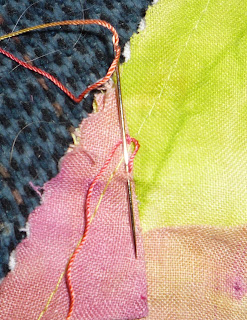 Take your thread up and under the straight stitch you made and take it down as close as possible to where you came up but not in the same hole. 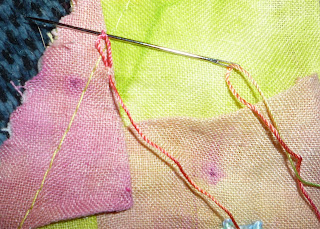 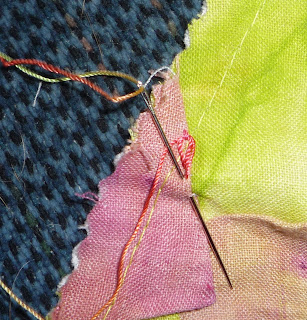 With this loop as well you take your needle down as close to but not in the same hole as you came up. Bring your needle up again a bit below to start your next pair of loops. 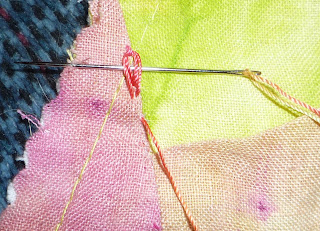 You make another loop, this time taking your needle under the last two loops to secure it, in the same manner as you went under the straight stitch with the first pair of loops. 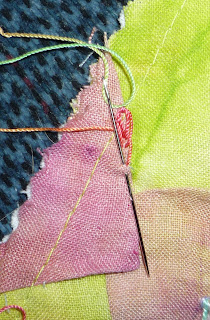 Take your needle down as close to but not in the same hole as you came up and then bring it up again a tiny bit below to make the second loop of the pair. 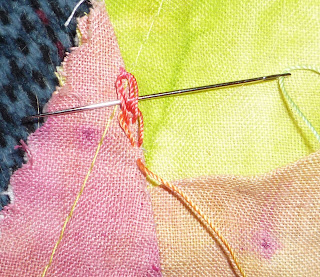 Make the second loop in this set by taking your needle under the first pair of loops again and then down as close to but not in the same hole you just came up. 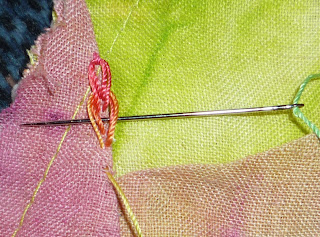 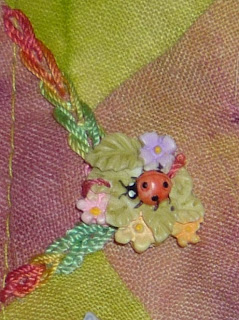 And this is what you end up with. In this sample I had a very small patch to work with and I did braid stitch along each seam from the edge of the block to the corner of the patch. I used a small charm (a thrift store find) to cover the intersection of the two lines of braid stitch. I love the way the varigated thread works up in braid stitch. This is done in Gloriana Princess Petite Perle silk thread.

NickiLee said…
Kerry - thank you! Love this stitch! Just looked through all your other stitch tuts and think I'm going to sit down and have myself a stitching party this weekend! Thanks you so much for putting all this togehter. I've got to add you to my blog of favorites so I don't "miss a stitch"
November 17, 2009 at 10:43 AM

GailM. said…
Very Nice Kerry. I don't think I've seen this double chain before. It might just make it's way into one of my socks this week. Thanks for sharing.
November 18, 2009 at 5:43 AM