March 03, 2012
I imagine everyone is getting tired of looking at this block of Wendy's I have been working on but I finished it today so I thought I would show you what else I added to it. 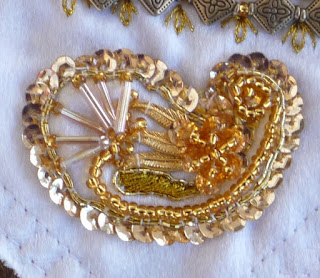 I decided the third (and last) motif on the block would be a paisley which I thought tied in well with the peacock theme.  I started by couching down a double row of Japan gold-ish thread around the paisley shape.  I added a fan shape of bugle and seed beads at the fat end of the paisley and some more seed beads leading from there back to the small end.  I filled in the small paisley shape inside the big one with satin stitch in metallic thread and then added three feather charms and a sequin flower (remember these from last week's BAS?)  The finishing touch was the sequins around the outside.  I decided I wanted a scalloped edge around the outside so I used sequin trim and cut one third off each sequin on the trim before I stitched them down so they would snug up nicely to the Japan gold (yes, I was getting a little obsessive at this point!  lol)  For the most part, it worked though! 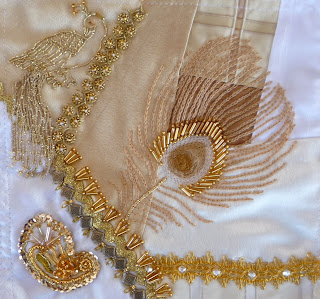 And there is the completed block which will be in the mail to Flora bright and early Monday morning.  The feather motif was large so there was only room for three motifs and three seam treatments.  It looks a bit unbalanced with the heavy seams and the airy feather but I think Wendy will be pleased anyway.

I have enjoyed working on this block for Wendy so much I have pretty well decided I will try to duplicate the block for myself at some point.  I'm telling myself that anyway because this one is very hard to mail away - I really want to keep it!  roflol

karen said…
wonderful block, love the way the peacock feather leads the eye to the peacock perched. Beautiful work and very inspiring. I've found that the photos do not do justice to the real block! No wonder you want to keep it!
March 3, 2012 at 6:21 PM

Wendy said…
Kerry, my blocks is just gorgeous and I love every element that you have put in the block. Thank you so much for working on it and letting your creative muse loose on my block. Just stunning!
March 3, 2012 at 11:21 PM

grbev said…
I love your blog. And I love this block! I am learning so much from you. Thank you for fulfilling your goals of adding to your tutorials. What a "gold" mine of information for the timid novice like myself. My head is full of ideas and information. Now if it would just flow from my brain, down my arm, out my fingers, through the needle and thread.... (sigh)... I also have a goal this year: Have some nice examples of stitching done to share at Cathy K. "CQ in September" which is being held at my home in Utah. I better get stitching!!
March 4, 2012 at 10:53 AM