You can accomplish this in whatever way suits you - here is how I did mine.

First of all, I made two lines of small beads on the seam itself.  This was done by using a beaded backstitch.   I found a tutorial for you at Craft Passion.  It give you the general idea and pictures always make it easier than words.  The way I do it is to bring the needle up through the fabric, string on three beads and lay them on the fabric - then take the needle down through the fabric and back up behind the last bead.  Go through that bead again and then add three more.  Carry on like that - I'll try to draw it so it makes sense.

After the two lines of beading were done, I added a third more interesting line.  In the first one below, I went through the first bead of the second row of beaded backstitch and then threaded four beads on my thread.  Take your needle back onto the third of the four beads and then thread on two more.  Skip the three beads after the one you came up from on the beaded backstitch row and take your needle through the next one.  Then you repeat the process again.  Here is the actual beading and below that is a diagram that might make it clearer (I hope!) 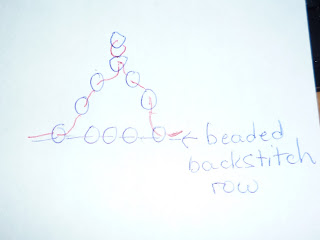 On the other seam I did the same two rows of beaded backstitch and then added a sort of picot edging.

I went through a bead on the second beaded backstitch row, then strung five beads on my needle and took it back through the base row, skipping three beads and going through the fourth.  Then I carried on by stringing five beads again, etc.
These are my examples - I am sure you can come up with better ones.  Anyway, that is the BAS challenge for this week - to make a seam of only beads.  Have fun!
Posted by Unknown at 11:35 PM 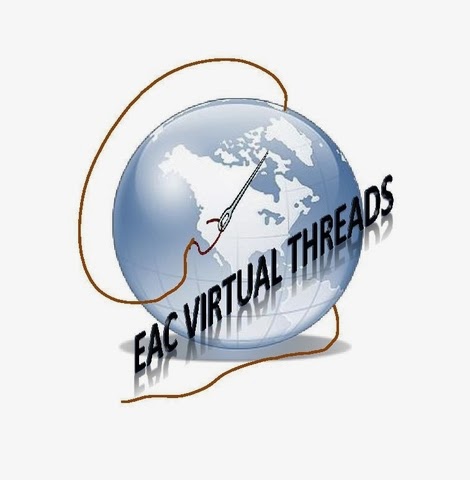 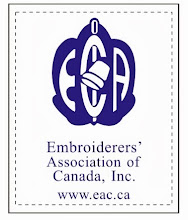