November 12, 2015
As I mentioned in a previous post, I am just getting used to being home again after working away for five months.  Being away that long, you can expect a few changes in the neighbourhood - folks moving in, folks moving out... 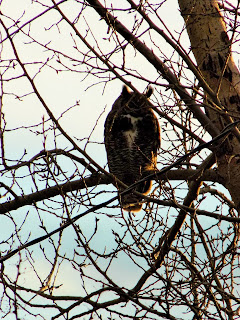 So, this is my new neighbour who has moved into the tree on the other side of my front yard.  He might not look like much here but when he spreads his wings and flies across the yard, he is pretty impressive.  I haven't got close enough yet to determine what kind of owl he is for sure but he seems to be making himself at home which is fine with me as long as he doesn't start eyeing up the cats or my little 5 lb Pom!  They aren't going outside unsupervised anymore. 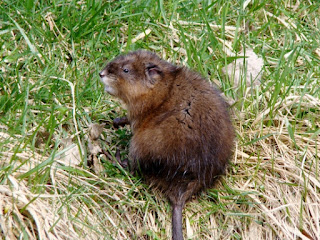 Yesterday I met the newest addition - a muskrat!  It has been so dry around here most of the ponds have dried up so I guess he is adapting.  While I was sitting on my porch I watched him scamper across the front yard.  My heart did a little flip because at first he looked like a rat!  We don't have rats here in Alberta (long story involving a rat patrol, etc) so thinking you see one is a big deal.  I continued to watch him as he scampered around, then across the yard and under the porch.
When my husband got home from work, I told him we had a muskrat under the porch and we both thought that was pretty interesting.  Later that evening though we heard enough noise from the cellar to realize it wasn't the porch he was living under, it was the house!  So, of course we named him.  And now that we know Muskrat Sally is down there we can hear him moving around all evening long, banging against the furnace vents. It remains to be seen how the new tenant works out.